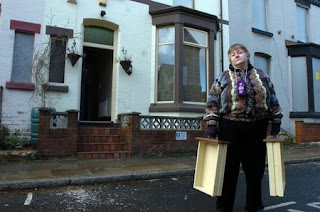 
Sorry but there is no other word for it, it is eviction, and I feel so very sad.

Here is the latest news, and I took the above picture from here also, and duly credit Mr Bartlett with it and hope he doesn't mind me re-using it:

Not a lot more to be said, other than to send Elizabeth sympathy, and ask that people reading this read these links:

My past blog, with Elizabeth's own description of what she has gone through:

with links to further sources of information (including Adam Wilkinson's damning report for SAVE) and a Commons Select Committee report.

Here is the BEVEL website, with so much more information and videos, including Elizabeth's 'farewell to a home' party:

I appreciate this is getting to be a habit, but here's a blast from the past, Malcolm Fraser in Building Design, and I absolutely agree with him:

Pulling down houses is not sustainability

The Pathfinder programme — government investment of £2 billion over the next 15 years to revitalise nine northern English urban areas — ought to be magnificent news.

Having lived through the urban catharsis of the late 20th century — institutionalised contempt for the built environments we inherited, followed by a reactive timidity towards them — we must have learned by now how to take a good, balanced view of renewal.

We might start by looking at the resources we have inherited, namely a mix of industrial and residential. Patrick Geddes’s concept of “conservative surgery” is an excellent tool here — the idea that you repair, alter or conserve the best of the urban fabric while introducing open space and new buildings in place of the poorer.

You might imagine that such “surgery” would be unlikely to involve the demolition of Victorian terraced homes, which represent a huge resource, in both social and physical terms, embodying enormous energy — in both the cultural and kilojoule sense. That the Pathfinder programmes are threatening between 200,000 and 400,000 of them with demolition demonstrates that something has gone massively, even obscenely, wrong.

The scale is staggering, the obscenity both in the detail (people who love their houses being moved out) and at a city-wide scale. In Liverpool, for example, the proposed demolition of 20,000 homes has an unhappy symmetry with the 20,000-person waiting list for social housing.
That there is failure in these run-down areas is indisputable: but it’s a failure of employment and the spread of wealth, of social housing policies that blight whole areas, of perception and context. To blame this on the buildings in these areas is crazy — especially when those buildings are such successes elsewhere.

Their demolition is supported by the standard government view that big, physically dramatic acts, and big business and construction interests are preferable to the sort of small-scale repair and renewal programmes that involve small spends, and small builders, architects and landlords.

The iniquitous VAT regime where 17.5% tax penalises repair and renewal over demolition and new-build of course skews all analysis of the value of our built heritage. But even here the economic benefits of small-scale renewal are so clear that it doesn’t dent the basic case — as demonstrated on ITV’s Tonight Special, where a “derelict”, “failing”, “surplus” terraced house was transformed into a modern, open, insulated home for £18,000, matching the cost of its proposed demolition and way cheaper than a £100,000 replacement.

Such makeovers represent one approach. The comprehensive nature of the Pathfinder programmes should allow us to look at others that combine or subdivide individual properties to achieve market diversity.

But the post-war regeneration-by-wrecking-ball model remains, albeit disguised by buzzwords and doublespeak where “slum clearance” programmes are rebranded as “sustainable communities”.

But the biggest crime is against the idea of sustainability, its apparent high moral authority abused to justify the wrecking ball. It’s a mystery that sustainability seems only ever to be expressed in terms of new building, rather than as a complete analysis of the costs and benefits. And it’s a disgrace that this has cast heritage bodies — arguing here for a proper audit of the resources offered by our built environment — as somehow anti-sustainability.

The greater truth in all this, that clarifies and guides all others, is that “conservation” and “sustainability” are not separate boxes to tick, not at war with each other, but are, properly applied, one and the same thing: a view of the world we have inherited as a resource that needs treating with care and respect.

and I hope all right thinking people agree also. That's not the government of course, whose Big Idea all this was...  (based on the most flimsy of evidence 'Housing Market Renewal' of this nature would work)

...and clearly not certain of the fuckwits who post comments* on the Liverpool Echo site, but you have to wonder at man's inhumanity to (wo)man and try to forgive their stupidity, although I'm finding it difficult. (*Update... I note the worst  comments have been removed... thankfully.)


and a further example of pointless destruction and a split community:

This is so upsetting that it's possible for this type of large-scale "renewal" to happen in the 21st Century. It is far easier to blame the built environment for social problems than to actually address the underlying causes. I think to schemes very similar to this in the United States in the 1950s and 1960s, and many communities are still recovering from the massive social upheaval it caused.

Indeed Mark, and this is being repeated in so many places in the north. We carried out similar 'cleansing' operations in the so-called 'slum clearances' in the 20th century here also, with all the social upheaval that caused. We have learned nothing it seems.